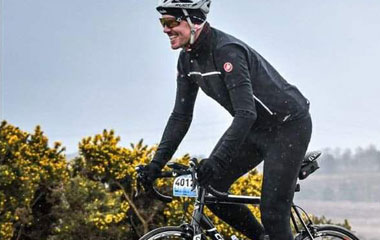 Tell us about yourself

I’m originally from Bournemouth, and moved to France with my family as a teenager, when my parents decided to hit the button on a long held dream. I was only a year in France until I got itchy feet and applied to be a male au-pair in Bonn and Cologne in Germany - this was the most rewarding experience ever, and if that sounds unlikely now, back then it was almost unheard of.

The driver for this move was my love of travel, as it was suggested to me as a great way to experience a new culture and see new places. I made a lot of life-long friends there, and even found that even though I moved there with no German whatsoever, I was dreaming in German (probably grammatically awful German, but still!) after just a few months. I think this was because no-one spoke English to me in an effort to help me learn, something that looking back, I’m very grateful for.

I’ve always been interested in design, but I first got interested in Landscape Architecture living in Germany, being struck by how imaginative and engaging the play spaces where I lived were (an important consideration as an au-pair!) and how much thought went into their urban and residential environments.  A return to the UK saw me complete my A levels in Oxford, after which I studied Landscape Architecture both as an undergraduate and postgraduate at University of Gloucestershire in Cheltenham.

I live in Trowbridge where my wife and I share our garden with a bunch of chickens, who, if you turn your back will barge their way indoors and park themselves on the kitchen floor, refusing to budge, like they own the place. I suspect in some way they probably do.

What attracted you to join SBC?

I was based in Bristol working for a multi-national consultancy after university. I learned a lot, but when I saw the job advert looking for a Landscape Architect at SBC I was intrigued, because it was clear that this was a place that was offering the opportunity to be involved in so much of what a Landscape Architect does, with a tremendously diverse scope of work – and crucially, the chance to really ‘own’ a project, and see it through from inception to completion.

Working for a local authority means you directly represent the ‘client’ too – the people of Swindon. This is really rewarding.

A well-known American Landscape Architect once answered the question ‘what is Landscape Architecture?’ with the reply - ‘the design of everything that doesn’t have a roof on it’. I love this response not just because it’s true, but because it is also a good reflection on the work that I’ve been involved in at SBC. I’ve designed play areas, new woodlands, country parks and major open spaces, urban squares, sports hubs, worked on highway infrastructure projects, major urban expansion areas, alongside development control and more strategic planning work too. I’m currently working with colleagues on a design for a town centre transport hub – the list goes on!

Swindon is a growing town with huge potential, it’s rewarding to be a part of realising it.

What do you most enjoy about working here?

SBC has given me opportunities way beyond in-depth exposure to a diverse portfolio of work. It has given me support to progress my own learning and career. I’m an accredited Project Manager (PRINCE and NEC), and I received support in becoming a chartered member of my professional body, the Landscape Institute. This was no small investment, as this took not just a huge amount of time for me as a candidate, but placed a real responsibility on my mentor, a more experienced chartered colleague in our team. I have a great deal of respect for the very talented and supportive people I work with, it sounds like a cliché thing to say I know, but there are so many great people at SBC.

The organisation has also recently established a leadership programme. I’ve been successful in my recent application to join the ‘Aspiring Leaders’ programme, and am in the middle of a very motivating challenge that our team will be presenting to corporate board.

What motivates you at work?

The opportunity to make a difference.

What do you like to do in your spare time?

When the life-admin stuff is out the way, I do enjoy getting out on my bike, and a couple of years ago joined my local road cycling club. I’m afraid I’m very much in danger of looking like a Tour de France reject who’s commiserated himself with double (triple/quadruple..) helpings at the coffee stop - but I now actually find myself enjoying jumping out of bed at dawn on a Sunday morning for a pacey 70 mile club ride – something I never thought could ever happen. Like, ever.

Where is the best place you have visited?

My wife and I have been to loads of places that hold special places in our hearts. She is from Ireland and I love that part of the world, and cycling has really opened my eyes to the amazing countryside right here in Wiltshire at our doorstep.  But I’m going to call Montpellier in France where I moved with my family – they’re still there and thriving, so I certainly see it as ‘home’ in some way, but even without this connection, it is an amazing growing city set in-between mountains and the Mediterranean.

What is your favourite film or book and why?

That’s hard. Filmwise, I’ll settle on what is for me a real feel good film, ‘My Neighbour Totoro’, for those who have never heard of it, an animated Japanese film by Hayao Miyazaki, set in 1950’s rural Japan. It’s inspiring and uplifting, and every time I see it, I take something new from it. It’s all exquisitely hand drawn, with a brilliant story about two sisters who move to a house in the country with their dad to be closer to their mum, who is a patient in hospital nearby - then they discover these creatures in the forest…